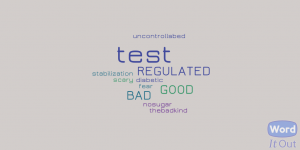 It was driven into my head during the very first days we experienced life with diabetes (or life knowing diabetes was with us now. I still think if I’d been a more astute mom she could have been diagnosed three weeks prior. But I digress). From the first days on the hospital floor, doctors and educators and social works said it over and over and over:

Use your words wisely.

Lauren was just six when she was diagnosed, new to kindergarten and still talking about her sixth birthday party (It was a “parade” theme. We asked each child coming to dress like someone you’d see in a parade, and then sent flyers around our street and to the nursing home at the top of our street announcing a parade time. The kids were led around the block, twirling batons, tooting horns, riding decorated bikes as our neighbors and the seniors cheered. Some cake and we were done. How’s that for totally pinterestable?) She’d always been mature for her age and her language skills were on par with some folks running for public office.

But still, the educational team told me, the way I spoke to her about her diabetes would shape the way she felt about it. And it was my job to – even on my own time and in my own mind – learn how to talk about it in a way that helped her think in the positive.

I bring this up because frankly, I’m a bit surprised every parent is not taught this. It just makes sense to me. I can usually tell an “older school” person in the diabetes world by their word choices. After all, I don’t think we got as touchy-feely with emotions and all this until, oh, maybe 15 year ago. (And that does not mean folks did not care then; I just don’t think we thought about language use as much perhaps). But lately, I see parents using terms in the diabetes world that we were taught not to use. It surprises me – I’m not saying they are wrong; it could be that our medical team was just really careful about such things. But in a way, so many of them just make sense to me. So here are a list of words that, as I raised my daughter with diabetes, I chose to avoid. I’ve also included the reasons, which just always resonated with me.

*Good” or “Bad.” If our team said it to me once, they said it to me a million times: there is no such thing as a good or bad blood glucose reading. Because every reading is simply this: information to work with. Every reading is a victory too: it wasn’t long ago folks had no idea what their blood sugars were and had to rely on urine strips and odd readings at the doctors that kind of made no sense. Now we have the ability to know (well, to kind of know … meters have a long way to go before they are perfect), what blood glucose values we are looking at and what to do with them. When Lauren was little, our team told us to never call a BG good or bad because, for the most part, there is not a lot she can do to keep them in range all the time, and calling them good or bad makes it feel like a judgment every time she checked her bg. Makes sense to me.

I remember when Lauren was quite little; she was sitting out on our front porch checking her blood sugar when a friend – who happens to be a doctor – was stopping by. She stopped and watched Lauren go through the process (back when you waited 45 seconds for the countdown. Anyone remember when people would see that countdown and say “She’s dropping!” LOL). When her number came up, that doctor asked “Is that bad?” And tiny Lauren said to her, “It’s not good or bad. It’s just a number.” I always loved that she not only got that but embraced it. (At least while she was little).

Same goes for a1cs. We all judge ourselves on them – we cannot help it. But what if they were just information too, and we stopped labeling them as “Good” or “bad” and instead used them to think about what we need to do next? I’d love to not feel judged by an a1C. Don’t know if that is mentally possible; but not calling them good or bad might be a first step.

*It’s “Check,” not “test.” We are not asking our loved ones with diabetes to perform when they check blood sugars, so its not a test. It’s a check. Checking takes the judgement out of the word for it, and helps move toward that place where they are not good or bad, they are just information.

Diabetes is not who they are. It’s not the total of their being. It’s just something they happen to have to deal with (yeah, all the time. But still). I have always wanted my daughter to be a person first, and a person dealing with diabetes second. I think labeling like this can make people think of you as the disease first, a person second. Would you ever call a child a “cancerous?” I think not. Same should go for diabetes. I know much of the on line community has embraced this and simplified it with things like “CWD (child with diabetes)” and “PWD (person with diabetes)” as acronyms. I applaud that.

*It’s never “regulated” or “stabilized.” This is a harder one, because it is soooo hard to explain to the rest of the world how it is with diabetes. So what’s the right way to say it? Feel free to give ideas here. I hate sounding whiny. What I usually say is “Well, there is no ‘regulation’ or even ‘remission’ with Type 1. Lauren’s blood sugars are constantly changing and that’s why we have to be so vigilant in checking them and giving insulin.” But that’s more one for the outside world, not us. We never say “regulated,” do we?

Those are just a few. And I’m not saying you’re a bad person if you use them (we don’t say good or bad, after all!) That said, it has always made sense to me and I’ve tried to stick with it all these years. Are there words you prefer to use over others? Share here. Because our words do matter. We need to use them well.

Oh, one last thing: a few words I always use to describe all the folks I know living with Type 1 Diabetes:

Awesome. Brave. Amazing. Determined. Caring. Helpful. Beautiful inside and out.

17 thoughts on “Using Words Wisely: They Really Do Matter”