This post is special to me, and is about a young man who took a stand. My dream is that we will get this to circulate so much and gather so many positive comments for him in the comments section that it will stand as a testament to a kid who simply did not let bullies mess with his health and happiness. So comment and share. And next time you hear of someone being bullied (even not about diabetes) share A.J.’s story. It’s wonderful.

Heroes come in all sizes, ages and forms. Sometimes, they leap tall buildings in a single bound. Other times they are even more impressive, taking their stand more quietly, but with more toughness, determination and “good for us all” will than Superman and Spiderman combined.

Take young A.J.  A seventh grader, he not only does well in school and treats his mom nicely, he takes to the football field every day, an active and enthusiastic member of his 7th grade football team.

From the sidelines, he looks good out there; powerful, athletic, and a big enough boy to be a threat. And he looks happy: A.J. clearly loves football and all it entails. But what most folks cannot see is what it takes for him to be a productive team player. Since AJ has type 1 diabetes, he has to manage blood glucose, plan snacks before and after, check multiple times during games, adapt when practice sessions take on a new rhythm, and of course, lug all that diabetes gear one needs at all times along with him.

But that’s not what makes A.J. a hero. What makes this young man a hero is how he faced down bullying, prejudice and ignorance this past week with a level head and matter-of-factness that we adults could even learn from.

And we all need to know and celebrate this story. Because it matters. Here’s what happened.

A.J. was at football practice the other day, and went to his gear back to grab his meter and do a quick blood sugar check – something all athletes with T1D have to weave into their sports time as if it were nothing. But when he opened his bag, all his diabetes gear was gone. No meter. No strips. No lancet. No glucose tablets. Panicked for a moment, A.J. wondered how he could have been irresponsible enough to misplace it. But he knew he had put it there. Confused and concerned, he sat for a moment, wishing for an answer and worrying about getting back on the field.

Then another boy spoke up and told A.J. the deal. Some kids on the team thought it would be “funny” to take his diabetes supplies and hide them, the other boy told A.J. They’d gone through his bag while he was not looking and removed it all: the very tools A.J. needs to stay alive every single day.

Angry, upset and confused as to why boys would do such a thing, A.J. jumped to his feet and approached the boys in question.

Only to face a chant, harmonious as if practiced, from that very group of boys.

But that’s not what A.J. did. What he did was this: tell the boys they had no right to chant at him. Tell them they’d taken away important tools in his life; the tools he needed to stay safe, healthy and active out on that field and indeed everywhere. Then, as the boys watched, he marched over to the team coach and reported the entire incident.

It’s risky to speak up for what is right. A.J. faced the possibility of more ridicule. He faced the very real chance that reporting to the coach would impact the team (with suspensions and more; and anyone with a kid in youth sports can tell you that parents are not always kind about such things). But in that instant, A.J. understood what we all need to embrace: setting people straight and calling out bullies is always the right thing to do.

His actions worked. The coach held a meeting with all the players and talked through the incident. They are asking a person from JDRF to come teach them more. They are supporting the walk. The boys in question were handed punishments, and the entire team – including parents – learned. 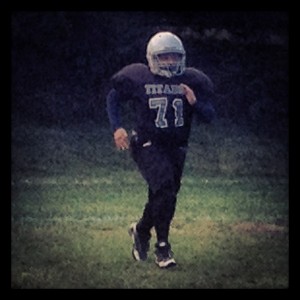 How about that for super hero actions? Think about it: in our lives with diabetes along we all face some kind of “bullying” or at least ignorant actions at times. The woman at the store who tells you “it’s a shame. You should have just fed your kid right.” The parent who “does you a favor” and does not invite your child to the sleepover so you “won’t have to deal with it.” The looks you get when you pull out a needle or a pump or a meter? Kids are cruel too. I know one boy who used to cringe as kids chanted “ED boy! ED Boy!” as he walked in the halls of his school (Erectile dysfunction. Stupid commercials during football games). What if we all had a little more A.J. in us and simple said “stop.”

I wanted this to be published here because A.J. did not just stick up for himself on the field that day. He stuck up for all of us. For every kid and adult out there facing cruel actions and behavior. For the kids who are not diagnosed yet but might face this. Forever on, when a kid feels alone, scared, bullied, picked on about diabetes, they can google “bullying and diabetes” and see A.J.s face and read his story. A.J.’s heroic actions will help many, now and into the future.

It reminded me of something I heard Jay Hewitt, world ironman champion and person with T1D, say recently to a room full of kids with diabetes. “You’re smarter than the other kids. Those other kids don’t know a carb from a carburetor, and they know it. They look up to you.” Which, I think, is what makes insecure kids pick on kids like A.J. They want to bring him down. They know they cannot rise to his awesomeness, so they try to pull him lower. But this time, it didn’t work. And maybe when another kid reads this one day, it won’t work when and if someone tries it on them.

Because A.J.: you bravely stood up for all of us, never considering any harm that might come your way. A.J. gave me one simple reason he took a stand: “They were messing with my life.” You, young man, are our own diabetes world super hero.

41 thoughts on “Meet A.J.: The boy who faced down bullying about diabetes like the Super Hero he is”